The downtown core is in the midst of a tremendous transition marked by major urban redevelopment projects which, as they are completed, are changing the nature of the community.

Traditionally, the downtown core served as a hub for business and shopping, but for many years there was little economic expansion. Beginning with the opening of Horton Plaza in the 1980s, the city began a renewal that continues today. Highlighted by the construction of a new baseball-only stadium in the East Village, the expansion of the Convention Center along the harbor front, massive new hotel construction, and the continued development of the Gaslamp Quarter, the center city is also seeing a boom in new residential construction. In the near future, downtown will be more than a place for commerce and tourism: it will also be home to as many as 50,000 people, an increase of about 40,000. This growth will impact First Lutheran Church both in terms of its membership and its ministry outreach. 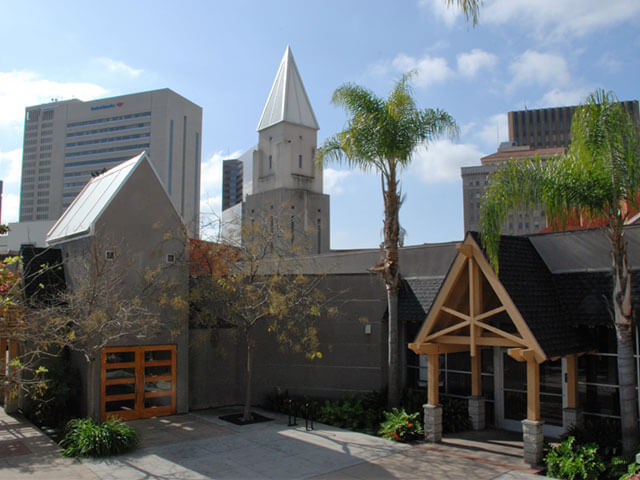 New downtown residents are changing the demographic makeup of the central area, which has been made up of a small number of households with a slightly older-than-average residential population. During the 1990’s, much of the downtown population lived in renter-occupied housing. A majority of those households were for single persons whose average incomes were below the national average. In addition, a large population of homeless has been living in the downtown area.

Already the number of persons living in rental housing is falling as low-rent units are replaced by upscale condominiums and boutique hotels. The homeless, too, are finding themselves displaced as their shelters are demolished or renovated, and they are becoming encouraged to relocate by civic leaders who view their presence on the streets of the city as incompatible with the future direction of the community. Many of these homeless suffer from mental impairment and are not able to integrate socially or economically in the life of the city. They seek safe shelter and increasingly find it disappearing. In the absence of support by government, agencies and individuals attempt to assist the homeless with services to help them survive. However, these agencies and individuals find themselves in opposition to civic officials and leaders who view this assistance as contributing to the ongoing presence of homeless persons in downtown. At present, no solution has been found to the problem of homelessness in San Diego.

For more details on First Lutheran’s response to the challenges of the changing downtown community, click here.